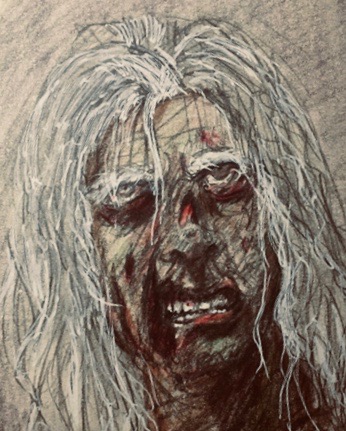 Dod Verden is a novella by yours truly and will be posted here in serial installments over the next week. While, yes, it is a zombie story; it is also an allegory about faith, hope, and companionship.

A creeping irritation, the kind evoked by the rattling of a snake or the glancing brush of a spider’s leg, woke Arkyn with a jerk.

The hair on his neck and arms bristled; his muscles twitched. Necessity had tuned his senses finer than a Stradivarius, and deep sleep was an indulgence he had never tasted.

Rolling over on his worn, lumpy pallet, Arkyn shoved aside his tangle of dirty blond hair and peered through a crack in the wall, blinking the grit from his eyes. Yes. There. In the distance, something shifted in the dim, half-light of the polluted dawn. Bending his ears, he detected a muted scuffling, an innocuous sound that could have been a scrap of wind batting litter around the streets were it not followed by a low, guttural noise and the muffled clacking of bones.

Feverishly, Arkyn rubbed his bleary eyes and squinted out again.

The shifting shadow emerged fully from between two dilapidated buildings and stumbled into the street roughly forty meters away. Slump-shouldered, it meandered toward Arkyn’s refuge, an old library that waited, silent as a dying dream, its wood panels flaking and time-worn to a scuffed sienna. The tired building squatted between a collapsed hardware store and an old brunost kitchen at the top of a T-intersection, and while it did not offer much protection, it did afford good visibility as well as three exits.

Some places had basements and underground shelters, but experience had taught Arkyn there was nothing worse than being cornered in a room with only one way in or out.

Arkyn hunkered like a jackrabbit on his cot beneath the row of boarded windows,  watching the thing encroach, dimly illumined by a weak sun, obscured by the chronic yellow haze of dust in the air. The creature staggered past shop after decrepit shop, the tick, click, tick, click of its bones growing louder until it stepped onto the cracked sidewalk in front of the library.

Arkyn stiffened, perspiration forming on his brow despite the cold, dry air.

It was so close now, Arkyn could make out the foul stains in its clothes, the maggots in its flesh.

Like the others in its horde, it was a nasty, misshapen creature, reeking of death and rancid blood, with half-rotted skin and eyes thick with cataracts. It scraped the naked bones of one hand along the library’s boarded windows, just above Arkyn’s head. Coming to the front door, it slowed, snuffling through empty holes where its nostrils had once been.

Draugar can smell life—blood, breath, refuse. And their ability to detect hot-blooded hosts had only increased as its pool of victims shrank. They were better than bloodhounds now that the only living beings were a few scraggly forest animals, some rodents, and insects. And Arkyn.

Had the lone man not discovered the simple element that confused the stalker’s olfactories, he too would have been slain a thousand times over, a thousand days ago.

The draugr snorted like a rutting boar, the sound moist and vile. It doubled back, crossing too closely for Arkyn to see it, yet he could feel its malevolent presence, could hear its feet stop a few feet and a damaged wall away from where he crouched, his calves beginning to cramp.

To a draugr, salt masked all but a gushing wound, unburned human waste, and, of course, bodily remains. Arkyn tried to remember when he had last doused the place and himself with saltwater. His dwindling supplies had meant reducing the frequency to once a week, and he usually sprinkled the perimeter of a Sunday. But what was today? Arkyn scrambled to formulate a calendar in his mind as though determining the day could save him.

He felt light-headed. Calm yourself Arkyn. Beneath his flannel and long johns, cold against his chest, Arkyn felt the reassuring touch of the rough-hewn cross. Swallowing, he carefully reached for the hilt of his makeshift dagger, an old, iron railway nail tucked at his belt. The small ax he’d pilfered from the Museum of Cultural History sat propped against a bookshelf a man’s length away, but if the draugr breached the door, he would have less than a second to grab it.

Draugar move as fast as flickering shadows when hungry, and they were always hungry.

Arkyn could smell it now, a horrific blend of diseased meat and rancid blood. His stomach clenched, bile rising in his throat, burning his esophagus. The caustic fumes stung his eyes, but he refused to blink.

Something soft touched the window’s ledge. Was it the draugr’s other hand? This one fleshy and bloated?

It dragged the appendage across the window ledge, undoubtedly picking up dozens of gnarled splinters, but there was neither hitch nor flinch in the movement.

Directly in front of him, the creature halted.

Arkyn felt the residue of dried salt crystals on his skin, in his hairline and armpits. Was it fresh enough? The creature must have smelled something; else, it wouldn’t have paused for so long. Its animalistic mind deliberated, was it the scent of fresh meat or the only memory of it?

An eternity passed, a sweaty, shaky, nausea-filled eternity. But finally, finally, the beast gave a moan and slumped away.

Arkyn waited until the sound of its retreat had vanished, then collapsed on his pallet, one by one catching the breaths he’d held for—a few minutes? It felt like an hour.

He stretched his stiff neck and rolled his ankles, working blood into the sharp pins and needles stabbing his feet.

Around him, disordered shafts of smoggy light seeped through the boarded windows, patching the rows of splintered shelves like a gloomy bog. Wait. Light? Awareness slapped Arykn, and he dove a hand into the patched pocket of his jacket. The old-fashioned watch, running on cogs and prayer, read half-past seven.

And that was something Arkyn could not afford. He had missed it twice before and each time suffered twenty-four hours of hell waiting for the next deposit. On the first occasion, he fell headlong into hallucinogenic torments. The world went wrong, twisting grotesquely out of shape. Frightening premonitions plagued him, and all his perceptions, memories, and instincts grew dangerously askew.

The second time, an earth-shattering migraine hewed his head in two, paralyzing him. He’d lain twitching on the floor for hours. If a draugr had come for him that day, he would have been a pig on a silver platter, an apple in his mouth. The horror of being unable to resist such a gory fate still haunted his nightmares.

This fear snapped at Arkyn’s ankles as he fled through the stacks without his usual quiet caution. His boots gritted and scraped on the debris littering the timber floors. He banged the back storage room’s door ajar and pounded up the two flights to the roof, swinging around the kinks in the creaking staircase. Arkyn reached the top and burst out onto the flat rooftop.

Before him, a shambling medium-sized town stretched in a sea of ugly, mangled buildings, the hilly land on which they stood making them look like the jagged, brown teeth in a homeless man’s maw.

Arkyn took a few steps to the roof’s edge, careful not to lean on the moldering guardrail, and scanned the sky. Almost instantly, a whirring touched the air. It began faintly, like the buzz of a fly, but as it neared, it grew into a teeth-clattering roar, kicking even more dirt and sand into the murky sky, whirling scraps of old newspapers, empty paper cups, and plastic bags. The vortex flapped Arkyn’s flannel shirt around his tall, rangy form, whipping his shaggy hair and beard across his scarred face.

He hadn’t missed it.

Arkyn sighed with relief but choked on the sullied air. He shielded his nose and mouth with a makeshift bandana and closed his eyes against the debris as a spotlight pierced the miasma like a sword. The light did not waver or wander but landed directly on its target: Arkyn.

A few roaches at his feet scuttled away from the blinding light, retreating to the shadows. Arkyn peered over his arm, watching through slitted eyes as the drone lowered a cable, detached its parcel, and lifted away. The rotor’s rhythm intensified, and the light extinguished. Then, into the shrouded heavens, the drone vanished.

Arkyn hurried over to the microwave-sized plastic crate it had left behind and knelt beside it, avoiding the decade-old splats of pigeon droppings. Printed on the side of the container was a single word: Livsbrød. Arkyn unlatched the sturdy clasps and lifted the lid. Inside, glass vials nestled upright in styrofoam beds, twelve in total. Arkyn carefully removed one tinkling bottle from its slot, uncorked it, and threw back the blood-red liquid.

The first touch to his tongue was bitter but quickly fell to sweet. But it was not the flavor that changed, rather his opinion of it. Replacing the empty vial, Arkyn sat back a moment and breathed. A faint tingling spread from his stomach and throat to the rest of his body. Upon reaching his head, the sensation cleared away his miry thoughts and brightened his vision, its warmth permeating his cells with well-being. No terrible episode today. He was safe.

The sensation’s initial swell ebbed, but there remained a pleasant weightlessness in his shoulders, a strength in his muscles, and courage in his heart. He sat at peace for some minutes, before his attention returned to the box and the simple message card contained in every delivery:

**Keep a wary eye out for Part 2, where danger will escalate as Arkyn comes toe to toe with the undead.

Until then, may the sun ever shine on your path.

I write, I sew, I play. I'm ill, I try, I pray. I rise again, when e'r I fall, to fight another day. View all posts by Molly Hopkins